Many game developers aim for the next blockbuster. The Boston based startup Dejobaan Games is different in many ways. „Somewhat special“ is what describes their productions best. Special, innovative, extraordinary, fun and creative. Of the various exciting games we want to have a closer look at „Elegy for a Dead World“ a game where the players themselves are part of the story while playing the game, they are constantly writing it. Ichiro Lambe is the head of Dejobaan Games… and he has a certain approach, or as Giantbomb.com says: „He likes the freedom of being an indie developer because he can use ideas and subjects in games which would otherwise „get him fired“ from a major company.“

Ichiro, can you tell us a little about you and your company?

Sure — I got my start in creating games in the early ’80s when my father sat me down in front of a TI 99/4A, and have been hooked ever since. I founded Dejobaan Games in 1999, and since then, we’ve created about 18 titles from Palm Pilot games back in the early ’00s to mobile, desktop, and VR titles in more recent years.

What does Dejobaan stand for?

I just tell everyone it’s the Greco-Nordic god of games and entertainment. 🙂

The games you are producing seem uncommon at first sight and at second sight: they are still very much different from ordinary games and their often linear structure. Does this have anything to do with your personality? Or th 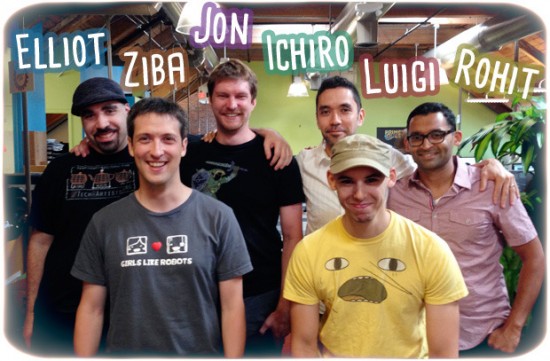 at of your team? Take „Elegy for a Dead World“ – the title sounds like one of a novel…

Since our teams are small, we have an opportunity to experiment. Take Elegy, for instance. It was originally based on an idea I had when I was plinking away on my Atari 800 — could I create an entertaining game where you simply „walked to the right“? A few years ago, I wanted to explore this idea, and teamed up with Popcannibal; that idea quickly evolved into Elegy. Here’s a bit on how the game began its life:

… and the visuals look like as if they were inspired by French comics of the early 80s.

That’s all the work of our talented artist, Luigi Guatieri. He took inspiration from artist JMW Turner (among others in Romantic era art), one central theme being the insignificance of humanity versus environment. You can look at Turner’s work and see the connection to Elegy — large swaths of color, with humans represented in a small way. This is best explained using pictures and video:

The ludic experience in „Elegy for a Dead World“ is unlike anything that I and many others have ever seen. Can you explain what the players‘ mission is? And where do these actions lead to? Is there a goal?

There was much internal debate about how explicit we should make the goals and motivations. Eventually, it came down to the fact (we’d argue) that people are inherently creative, and simply like telling stories to each other. We see it in social media posts („Let me tell you about my morning…“ „Here’s my trip to New Zealand…“ „Here’s a drawing I made…“). The single game-mechanical/scored purpose of playing Elegy is to create stories compelling enough to cause other people to read and upvote them. Really, we just wanted to give people a framework to show themselves that everyone could be creative.

How did you come across this idea? And do you intentionally design your games to be special or does this simply happen?

Once we had the initial prototype (a game where players simply „walked to the right“), we started tossing ideas at the wall. One was that we should allow players to walk through and annotate anything they came across with a few words; that evolved into something where you could string those together into a story. In testing, we found that many players were intimidated when we presented them with a metaphorical blank page (we gave them the visuals, but no words to start with). It was a chance lunch with a handful of developers, where we were talking about the problem. One indie, Danny Day , suggested the fill-in-the-blanks framework, and that’s what we ultimately adopted.

The artwork of „Elegy“ blends very well into the story and „mission“ of the game. It is rich enough to make the player want to see more and more while at the same time deserted enough to carry the message of a „dead world“. How would you describe the creative process? How did this world evolve around the game during development or was it vice versa?

During our initial week of prototyping, Popcannibal’s Ziba Scott and I sat down in the kitchen of the Indie Game Collective, read poetry, and drew out (using pencil and paper) our concepts of worlds that followed from Ozymandias, When I Have Fears, and Darkness. I have the sketches around here somewhere, but for the life of me, I can’t find them(!) Those are what Luigi ultimately turned into actual beautiful artwork.

Can one even say that this game story is being written from both sides of the screen at the same time?

Yes! I like to say that we’re co-creating with the player. 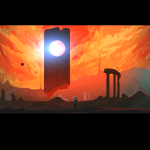 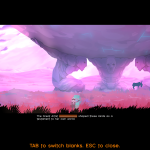 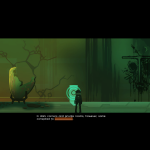 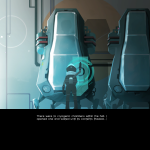 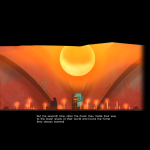 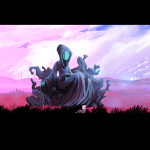 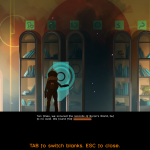 Your games remind me of the works of Jeff Minter. In Tempest 2000 or through his VLM player on the Atari Jaguar he combined visuals with music and interactive experiences. People still buy Atari Jaguar consoles just to sink into this total experience of becoming one with music, motion and emotion. Is this also your goal? Is emotion an important part of your vision?

I’ve always wanted to create games that made people cry, and I feel that we’ve accomplished that here. For instance, a woman once wrote in to say that she was using the game to write stories to her recently-departed father — it was an emotional experience for her, and helped her go through the grieving process. Powerful stuff, though since she brought so much of that to the experience, I can’t really say that we were wholly responsible for it.

There always was a niche market for unusual, maybe even artistic games such as Rez. Recently a growing number of such games was released: Flowers, Limbo, Journey and in a certain way also Ico to name one that clearly falls into the classic game category but yet breathes a strong artistic odor.

Do you sense public interest in „art“ in games? Or even a market?

I’m pretty optimistic about that — if novels, comics, radio, poetry, movies, and television can do this, why not games?

Which game would you call the perfect „art game“, one of your productions maybe?

I was on the IGF Nuovo jury this year; my pick for „pointing in the right direction“ art game would be Cibele . The author attempts so much — it’s such a personal experience that draws you into it through (sometimes) everyday actions — I’d love to see more of that.

What makes it fun for you, the developers and designers, to create „special“ games while at the same time you may also do just another platformer which may easily appeal to the mass market and make the development less risky?

I’d argue that it’s less risky to be different. Take a look at platformers on Steam, for instance: 62 entire pages of them! Take a look at Adventures of Pip on SteamSpy: I thought this was a fantastic game, but according to SteamSpy’s numbers, they’ve sold about 5,000 units. If that’s true, that’s really unfortunate.

While talking about risks: Alec Peters is currently producing a Star Trek sequel based on crowdfunding over in LA at the moment. Do you consider Crowdfunding to gain more importance in games development?

It was hugely important for Elegy. Our campaign grossed about $72k (USD) and raised awareness around the game. As to its future importance, I’m not sure — have we finally reached what people have been calling „Kickstarter fatigue„? Will the lion’s share of KS contributions start to go to just a few games?

Who in the world is… Ichiro Lambe?

KAUFEN: „Elegy of a Dead World“

← Werkstattgespräch in der Hanns-Seidl-Stiftung
„Retro-Gaming“: Business, Art or most of all… a Labour of Love? →